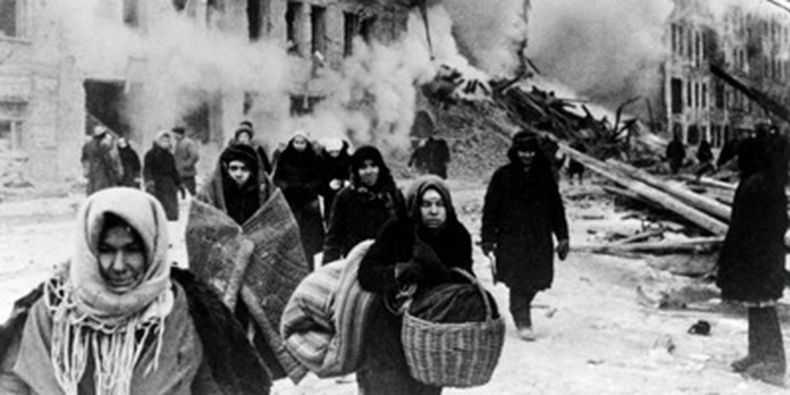 Although Marina's ability to remember current events are ravaged by the effects of Alzheimer's Disease in The Madonnas of Leningrad, her recollections of her life during the Siege of Leningrad during World War II are vividly preserved.   The novel offers a heartbreaking account of the brutal first winter of the Siege, and the horrific effects it had on the civilian population of the city.
Leningrad, now known as St. Petersburg, was a major economic and industrial center in 1941, making it a prime target of Hitler's forces during World War II.  Unwilling to provide the manpower and artillery necessary to capture and occupy the city, Hitler instead chose to isolate the city and starve its population of 3 million people, while destroying it from the air.

A seemingly impenetrable German blockade was put in place around Leningrad, and the resulting Siege, which began on September 8, 1941, lasted almost 900 days.  Virtually cut off from the rest of the world, residents of the city were without food, water, coal, oil, or sufficient weapons to defend themselves.  Residents were forced to eat whatever they could get their hands on, including bread made from sawdust, glue, trees, rats, pets, and other animals.  At the height of the winter of 1941-42, rations were cut to 250 grams of bread for laborers, and half that for office workers, children,  and other dependents, which translates to approximately 460 and 230 calories, respectively.   Reports of cannibalism were rampant as deaths from starvation mounted (Bidlack, 2012; Reid, 2012, pp. 1-3, 163-168, 287).
A dangerous evacuation and supply route was ultimately forged across frozen Lake Ladoga to the north of the city, however, food supplies sent in were nowhere near the levels necessary to support the city's population.    Although 1.4 million residents were ultimately evacuated, it is estimated that as many as 750,000 members of the civilian population starved or froze to death
(Reid, 2012, pp. 1, 95-96, 278).

Approximately 1.7 million Soviet soldiers and civilians were lost by the end of the Siege, the largest loss of life ever realized in any military maneuver.  Despite the perseverance of the city's residents, the Siege of Leningrad retains its place as one of the most tragic events in military history (Bidlack, 2012).
The video below provides background information regarding the Siege, and contains archival footage of the worsening conditions in Leningrad during  the winter of 1941-42.
The Road of Life, cut across frozen Lake Ladoga, brought desperately needed food and supplies to the starving residents of Leningrad during the first winter of the Siege.  Archival footage presented below outlines the German blockade around the city and the efforts involved in building the lifeline.

Suggestions for additional reading about the Siege...

Published in 2012, Anna Reid's narrative account of the Siege of Leningrad documents Hitler's plan to isolate and starve the city's population, a situation which was worsened by grave errors in judgement by Joseph Stalin and other Soviet leaders.  The experiences of soldiers on the front lines are discussed, as well as the lives of city residents who struggled to survive the horrific conditions resulting from the blockade.  Adding interest to the narrative are excerpts from newly released government documents and diary entries from those who endured the war.

The Siege  by Helen Dunmore

This critically acclaimed, award-winning work of fiction examines the savage effects the Siege of Leningrad has on one Soviet family.  As conditions during the brutal first winter of the Siege worsen, 23 year-old artist and teacher Anna Levin struggles to provide for her extended family amidst devastating hunger and hopelessness.  The novel is a moving tribute to the power of love, self-sacrifice, and the determination to endure against all odds.

City of Thieves  by David Benioff 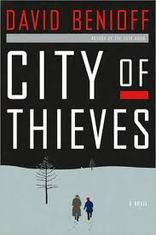 It is the winter of 1941, and the city of Leningrad is under siege by the German Army.   Kolya, a deserter from the Red Army, and Lev, a young Russian Jew caught stealing, have each been arrested by Soviet officers and sentenced to death.  The unlikely duo team up after a Soviet Colonel offers them a chance to save themselves from death by firing squad.  Their lives will be spared if they can manage to obtain something exceedingly rare in the city where deaths by starvation are mounting by the day:  a dozen eggs needed to bake a wedding cake for the Colonel's  daughter.  Both incredibly poignant and hugely funny, the novel traces the developing friendship between the two men as they forage through the dangerous city and German occupied territory in desperate search of the one thing that could save their lives.

The War File: Battlefield - The Siege of Leningrad

This DVD contains an episode of the Discovery Channel's Battlefield documentary TV series, which uses archival footage to document and examine the military and political aspects of the historic conflict.  The 96-minute episode provides an analysis of the leadership, strategies, and tactics on both sides of the conflict.

Read more about this documentary on Amazon.com

Academy Award-winning actress Miro Sorvino stars in this 2009 Russian-made film, in which she portrays a Russian-born, English journalist stuck in Leningrad after the chaos of an air raid prevents her from evacuating the city with other foreign reporters as the German army first surrounds the city in 1941.  The film chronicles her relationship with a group of resistance fighters during the three-year siege, as they struggle to survive the horrific conditions in the isolated city.

Read more about this film on IMDb.com.  A trailer for the film can be viewed below.