The State Hermitage Museum today, in St. Petersburg
The State Hermitage Museum, located in what is today known as St. Petersburg, Russia, is one of the foremost museums of art and culture in the world.  Founded in 1764 by Catherine the Great, it has been open to the public since 1852.   The three million items which comprise its collection include the largest collection of paintings in the world, works of graphic art, sculptures, works of applied art, numismatics (e.g., coins, currencies, medals), and a large variety of other items.  The Museum attracted almost 1.8 million visitors in 2011, over half of whom were from foreign countries.

A brief look at the Museum's spectacular architecture and a sampling of its many masterpieces can be viewed in the video below:

The Hermitage during the Siege of Leningrad...

In The Madonnas of Leningrad, Marina worked as a docent at the Hermitage Museum.  A substantial part of her story takes place in the Museum during the Siege of Leningrad, where Marina was part of a large team of volunteers who worked feverishly to evacuate the Museum's treasures from the city in anticipation of a German assault.  After that task was completed, a large group of individuals took up residence in the cellars of the Museum, seeking safety from the unrelenting air raids that demolished the city.  Marina's story serves as a poignant tribute to the efforts of those who saved the Museum's priceless collection, and those who endured the horrific conditions resulting from the Siege.

The Evacuation of the Museum's Collection... 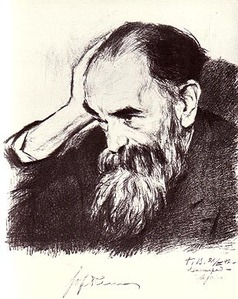 Director Orbeli
A summary of information obtained from the Hermitage website:

Iosef Orbeli, Director of the Hermitage from 1934 - 1951, was the mastermind behind the heroic efforts that saved the Museum's priceless collection from the Siege that virtually destroyed the city of Leningrad during WWII.  Fearing that the German Army might someday occupy the city, Orbeli had prepared a detailed plan for evacuation of the Museum's treasures to the Ural Mountains before the German invasion had even begun.  Once news of Hitler's invasion into Russian territory reached Leningrad, Orbeli enlisted the help of a team of Museum staffers, researchers, and volunteers to prepare exhibits for shipment.  Priceless paintings were removed from their frames for easier packing, with the frames remaining in the galleries as a silent pledge that the works of art would someday return.  Works that were too large or too fragile to ship were moved to the Museum's vaults and cellars, which were reinforced and used as bomb shelters.
From Leningrad by Anna Reid:

"After six days and nights of frantic activity, a first trainload of treasures -- about half a million items in more than one thousand crates -- left the city on July 1, 1941.  ...The train was made up of two engines, twenty-two freight wagons, an armoured car for the most valuable items and passenger carriers for guards and Hermitage staff, with flatbeds for anti-aircraft guns at either end...  A second train, containing 700,000 items in 422 crates, left on July 20th...   Another 351 crates were ready only after the [German] siege ring had almost closed, and spent the war stacked in a gallery on the Winter Palace's ground floor" (pp. 60-63). 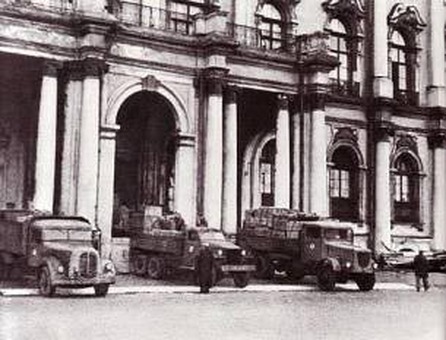 Trucks packed with crates of artwork prepare to leave the Hermitage in July, 1941
A summary of information obtained from the Hermitage website:

When the German blockade of Leningrad was fully in place and air raids began in earnest in September, 1941, two thousand people lived in the Hermitage bomb shelters, including  staff members and their families, scholars, museum workers, cultural figures, and others.  As the Siege wore on, living conditions in the cellar deteriorated, mirroring the incredible hardships endured by the rest of the civilian population.

The Museum sustained substantial damage during the Siege.  Volunteers continually kept watch on the roof of the Hermitage during air raids in an effort to minimize damage done by fires resulting from direct hits.  Inside the Museum, windows were taped to minimize the shatter of glass, and piles of sand and pools of water were maintained in each room of the museum to help in fire-fighting efforts when damage was incurred. 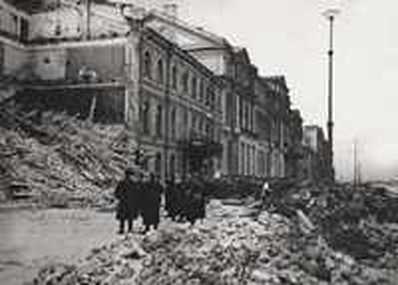 The Hermitage at the end of the Siege.
Once the Siege ended in January, 1944,  the remaining staff began preparations for the repair of the Museum and the ultimate return of the Museum's collection.  Plans were made to open the least damaged rooms of the Museum in the summer of 1944 for an exhibit of the items that had not been evacuated during the Siege, an event which provided a great boost to the morale of residents of the city who had survived the Siege.  In October, 1945, items that had been evacuated at the start of the Siege were finally returned to the Museum.  Not one item was missing.

For further information about the Museum...

The official website of the Hermitage Museum contains a wealth of information regarding the Museum, including highlights of its vast collection, current exhibits, individual works from its collection that are currently on tour at museums around the world, archives of past exhibits, digitized versions of many of its works, and virtual tours of various rooms of the museum.

In addition to a general history of the Museum, the website also contains a moving tribute to those who saved the Museum's collection during the Siege of Leningrad, including personal recollections from those who worked to save the works of art and later sought refuge in the Museum's vault, archival drawings depicting life in the Museum during the siege, historic photos of the city under siege, and photos documenting the triumphant return of the collection to the Museum after the war.

The Hermitage Collections
Volume 1:  Treasures of World Art
Volume 2:  From the Age of Enlightenment to the Present Day
by Oleg Yakovlevich, Dmitry Pavlovich Alexinsky, and Dr. Mikhail Piotrovsky

This two-volume set, published in 2010 and written by the Museum's current director and Museum researchers, is considered by critics to be a definitive work regarding the Museum.  The set provides a comprehensive history of the 250 year-old museum, showcases its architecture, and offers color reproductions of many of the masterpieces contained in its collection.

Rubens and His Age:  Treasures from the Hermitage Museum
by Christina Corsiglia

The Hermitage is known for its stunning collection of works by 17th Century Flemish artist Peter Paul Rubens.  Rubens' paintings hold special meaning for Marina in The Madonnas of Leningrad and she spends a great deal of time committing the finer details of his works to memory.  This title contains reproductions of classic works by Rubens and his students, and offers essays and analysis of their many religious masterpieces, portraits, and scenes from daily life.

The Hermitage: Journey in Time and Space
Directed by Vladimir Ptashchenko

This two-hour film provides a video tour of the Hermitage Museum.  The film spotlights the museum's famous architecture, and discusses the history of its major collections, with special emphasis on its many masterpieces.

Read more about this film on Amazon.com