One of the most moving aspects of The Madonnas of Leningrad is Marina's emotional response to the masterpieces at the Hermitage, and her particular affinity for the many paintings of the Madonna by various artists included in the collection.

As Marina wandered the empty rooms of the Museum each day, she pretended to give the tour she had presented to visitors before the war, and worked tirelessly to form mental images of the great works that formerly hung in the individual galleries.  To Marina,  committing the works of art to memory achieved two purposes:  it occupied and preserved her mind during the long months of the Siege, and it served as a tribute to the great works themselves.  With no guarantee that the Museum would survive the war or that its collection would ultimately be returned, it was her belief that if she could keep memories of the works alive in her own mind -- she could preserve the memories for future generations as well.

Marina organized her memories in a "memory palace," an imaginary building in her mind where room after room was filled with the art she admired -- mental images of which could be visited whenever she chose.
As the Siege wore on, those living in the cellar of the Museum suffered along with the rest of the civilian population of the city.  Deaths from starvation became commonplace, and any sense of hope was in short supply.

"There is nothing left now to distract them from the miseries of cold and hunger except their own
internal resources.  And so, as the world gets smaller and colder and dimmer, Marina notices, people
are becoming fixated...  Marina has her memory palace:  that has become her fixation.  She can now
walk anywhere in the picture gallery, and the sculptures and paintings appear so readily in her
mind that she can rattle them off without thinking.  What started as an exercise, a distraction, has
come to seem like the very point of her existence" (Dean, pp. 128-129).

A few of the great works that inspired Marina's will to survive...

The fact that readers react to Marina's great love for the works of art described in the novel is a testament to the author's ability to share nuances of individual works, in the form of Marina's memories, in sufficient detail to allow readers to picture the works in their own minds.

To enhance the experience of reading The Madonnas of Leningrad, digitized versions of a few of the works described so vividly by Marina in the novel are shown below.  Although a few of these works are sometimes loaned to other museums around the world, most remain on permanent exhibit at The Hermitage Museum.

Note:  Information contained on the Hermitage website regarding the history of each of the works of art presented below can be reached by clicking on each image. 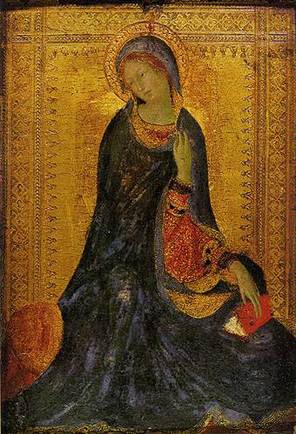 "If I could direct your attention over here, please.  In all this splendor, she would be easy to miss, she is so small and quiet, but this is one of the treasures of the collection.  She is exquisite, is she not?  Such liquidity and grace...This little Madonna was once half of a folding diptych; the other wing, which has gone missing, portrayed the Angel Gabriel...To us, she appears to be lost in her own thoughts, her head tilted in dreamy contemplation.  But actually she is listening to an unseen angel who is telling her that she will give birth to the son of God..." (Dean, p. 73). 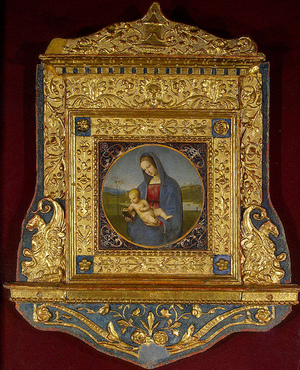 "The Conestabile Madonna was one of only three paintings that were packed with their frames.  Which is too bad for us, because the frame itself was quite beautiful and elaborate..."

"Everything in the painting has been arranged to fit inside the circle...The Madonna's head is slightly inclined...and the shore of the lake and the distant mountains curve into the center..."  (Dean, p. 222). 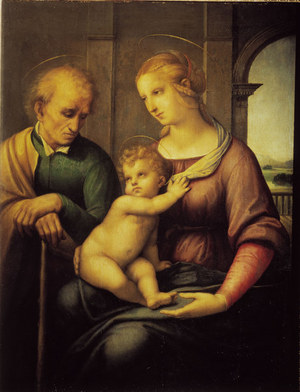 "This is the spot that held one of the most prized paintings in the entire Hermitage collection...I don't know that I will be able to do it justice...It's such a wondrous painting because Raphael took these mythical characters, the Virgin Mary and Joseph and the Christ Child, and he re-imagined them as real people, an actual family..."

"On one side...we have Mary.  She is beautiful but very distant and unaware.  And quite apart from her...is Joseph.  He's much older than Mary.  He leans on a walking stick and looks almost frail.  Between them...standing on his mother's lap, is the Christ Child.  He's a mama's boy.  He is eyeing Joseph fearfully and his arms are reaching out for his mother.  Joseph's expression, I think, is one of resigned disappointment, a father whose child rejects him for the mother..."

"One wouldn't notice the halos at first, but there they are, fine as piano wires.  It's almost as though Raphael was saying that what sets them apart from any other family is almost invisible  They might be us..." (Dean, p. 221). 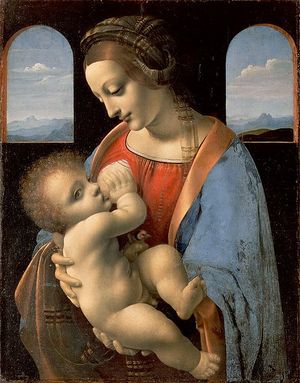 "Out of the shadowy square of painting that marks where the painting once hung, the Litte Madonna materializes.  With her aquiline nose and porcelain features, the Madonna is the perfect study of contentment, gazing down at her nursing child.  The Christ Child, though, is the center of the painting.  He is not a blank lump of sweet plump flesh but already commands an adult presence.  With one hand, he grasps the exposed breast and suckles absently, his dark shadowy eyes gazing out of the painting, sizing up the scene before him..." (Dean, pp. 79-80).

The Madonna and Child (a.k.a. the Benois Madonna)
Artist:  Leonardo da Vinci
1478 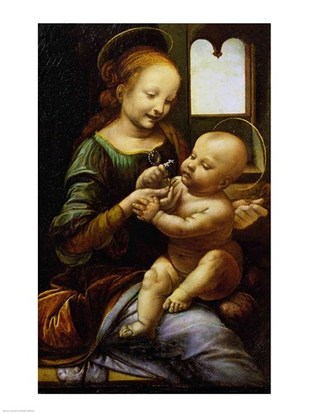 "Of all the Madonnas in the museum, Marina could never forget this one.  She loved this mother and child and misses the two of them with a particular ache.  The Mary is completely human, not a remote beauty but a young girl delighted with the surprise of this child, and the Christ Child is so fat and dimpled, a fleshy baby...He perches on little Mary's lap, his pudgy fingers grasping at the flower she holds up to his gaze..."

"Secretly she thinks of this painting as hers.  With Mary's high forehead, they even resemble each other, and Marina has sometimes fantasized that she herself could be the model..." (Dean, p. 78). 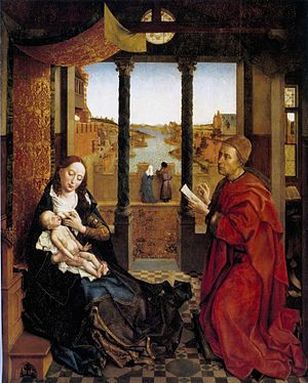 "The people who commissioned van der Weyden wanted an official painting for their guild...'Paint us a picture with the Madonna.'

"...But the artist didn't want to paint just another Madonna, because this was such a commonplace subject, so he cleverly puts himself into the picture, disguised as Saint Luke, the patron saint of artists...  He is over here, holding a small canvas and brush.  But not only has van der Weyden put himself in the picture, but he's dressed in bright red, from his head to his toes.  so our eye is drawn to him rather than to Mary..." (Dean, pp. 218-219).

The Rest on the Flight Into Egypt (Madonna with Partridges)
Artist:  Anthony van Dyck
1629-1630 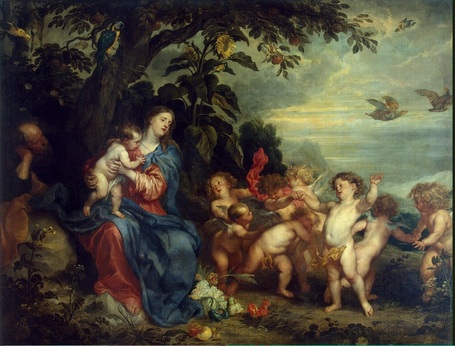 "She is wearing a crimson dress and a ruff...in the enormous frame that Anya is dusting, is a Madonna and child.  They look out of place among all these Flemish gentlefolk.  The painting is called The Rest on the Flight into Egypt, but two birds on the wing over Mary's head give the painting its nickname:  Madonna with Partridges." (Dean, pp. 132-133). 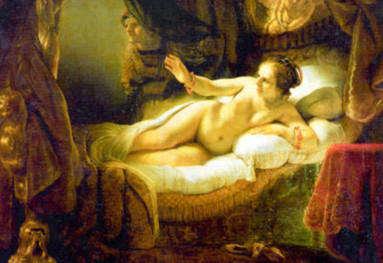 "This is the artist's first full-size female nude.  It illustrates the myth of Danae, a beautiful princess whose father, the king, locked her away in a bronze tower to thwart potential suitors.  There she is visited by Zeus, who has admired her...Here Danae is shielding her face from his light, or perhaps she is reaching out to him; it is tantalizingly hard to tell..." (Dean, p. 90). 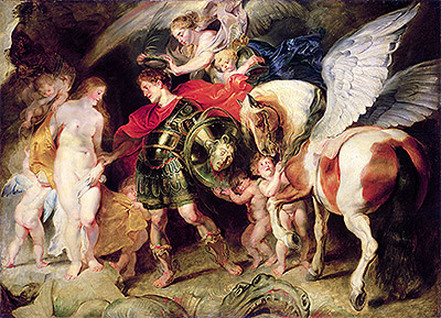 "...Drawing a deep breath, she silently wills up the image.  Gradually, a picture takes shape for her inside the frame.  It is Rubens portrayal of Andromeda being rescued by the warrior Perseus..."

"She is a princess and was about to be sacrificed to a sea monster.  Perseus just happened to be flying over the sea on his winged horse -- he had been off killing the evil gorgon, whose head is impaled on his shield here...He flew down and rescued her by slaying the sea monster...the angel putting the wreath on the hero's head and the little putti that busily attend the scene. They are draping garments over the modest young woman and holding the reins of Pegasus, the winged horse..."  (Dean, pp. 216-217). 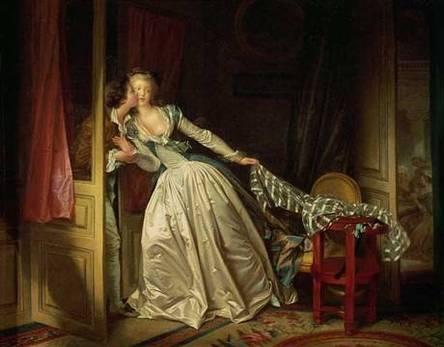 "...And over here, against the long wall, is a young girl in a beautiful heavy satin gown.  In the shadows, half-hidden behind a door, is her young man, and he is kissing her cheek.  Though she hasn't seen us yet, like a deer she is alert, listening intently, expecting to be interrupted at any moment by the woman in the next room.  The girl is poised to flee.  The long, sinuous line of her torso stretches away from the delicate contact of the kiss, through her outstretched arm, and then evaporates into the transparent folds of a scarf..." (Dean, p. 12). 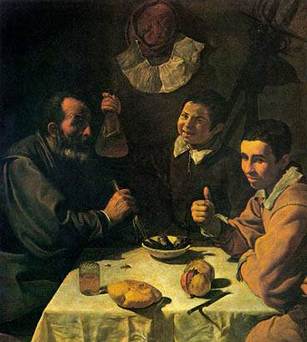 "Over here, to our left, is a table with a heavy white cloth.  Three Spanish peasants are eating lunch.  The fellow in the center is raising the decanter of wine and offering us a drink.  Clearly, they are enjoying themselves.  Their luncheon is light -- a dish of sardines, a pomegranate, and a loaf of bread -- but it is more than enough.  A whole loaf of bread, and white bread at that, not the blockade bread that is mostly wood shavings..." (Dean, p. 1). 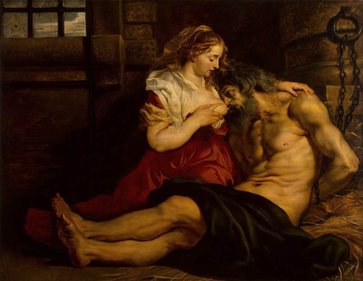 "The Rubens Room.  Even here, in a room riotous with flesh, the painting at the center of the long wall gives one pause...Before you look away in disgust or wink knowingly at one another, you should know that the artist insists that this is a picture about love.  Filial love.  The old man has been condemned by the Roman senate to die of hunger, and his daughter has come to his prison cell to and offered her breast to feed him.  This has nothing to do with the decorous love or amorous passion one is more accustomed to seeing in a painting.  It is raw and wretched and demeaning.  In the end, we are physical bodies and every abstract notion about love sinks beneath this fact..." (Dean, p. 137). 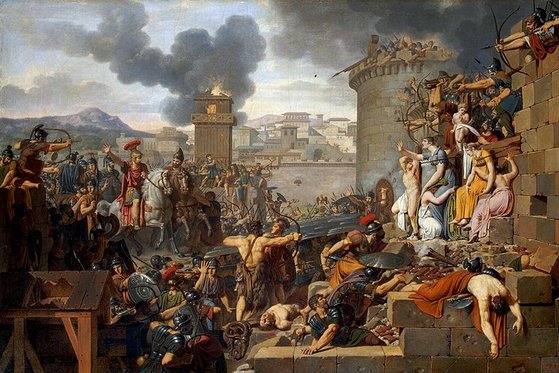 Marina's experience with war stood in stark contrast to her view of this painting.:

"...the legend of Metellus, a Roman general who showed mercy on the innocents.  We see the city has been surrounded, and at the gates, the army is preparing to storm the walls...What could be more dramatic?  There is no terror in this scene though...Notice, even the vanquished are beautiful...It is war without blood and vomit, without misery..." (Dean, p. 49).

A suggestion for further reading...

Readers interested in learning ways in which to understand and interpret works of art may enjoy the following title:

How to Look at a Painting  by Francoise Barbe-Gall

Barbe-Gall offers a framework to make artwork accessible to all by providing readers with various tools that can be used to interpret and appreciate great works of art.  Using both classic and more modern works as examples, the author offers lessons in deciphering an author's purpose, keys to understanding our emotional response to art, and the means to understand an artist's intentions through examination of the circumstances in which great works were created.